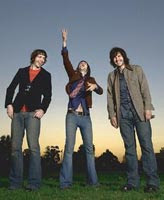 Today was a bit of an anxious day for me. It was the day that the Big Day Out 07 third line-up was to be announced. I knew straight up that this line-up was going to be all Australia acts, but I didn't expect it to be so damn good! added to the bill next year will be The Vines, Snowman, Sick Puppies, Macromantics (cant wait to see her!), Dan Kelly And The Alpha Males, Gersey, and Ground Components. But none of the announcements excited me as much as the announcement of Eddy Current Suppression Ring. My Dad (yes that right), has been raving these guys up, and now I finally have the chance of seeing them without getting busted for sneaking into overage venues. For anyone who doesn't live in Melbourne, I'm afraid you wont be seeing these guys perform at the Big Day Out, they are only appearing at the local stage in Meblourne. Have a listen and become amazed by the stylings of this band.